Turkish coffee is made with excellent coffee beans and usually uses Arabica beans. This is considered a unique coffee culture in Turkey and is recognized by UNESCO as an intangible cultural heritage. Especially at EXPO 2020, Dubai will have a performance of Turkish coffee making and a unique feature of the culture of enjoying “sand coffee.”

Why is Turkish coffee known?

Turkey has a political position where Asia, Europe, and Africa exchange. In terms of spiritual civilization, the difference between the three monotheistic traditions of Abrahamic origin, Judaism, Christianity, and Islam, led to conflicts and disputes that continue to this day. However, in terms of physical civilization, the Turki people contributed to Europe and today the whole world two common gifts: a hot bath (Turkish bath) and coffee (Turkish coffee).\ 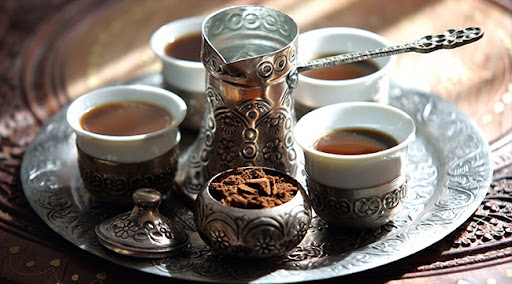 Coffee spread quietly from the 16th century and invaded Europe massively after the 17th century. History says that in 1555 the first two Syrian merchants brought coffee to sell in the capital of Turki. Istanbul is like “milk for chess players and thinkers.” By the mid-17th century, coffee had infiltrated the Ottoman court with coffee officials with more than 40 assistants preparing and serving for the emperor and his courtiers.

With the absolute prohibition of the Qur’an (also known as the Koran) on drinks with a high concentration of alcohol, coffee has become a favorite drink of the whole society.

In Turki, marriage and gender customs are also regulated through coffee etiquette. In this concoction, women are thoroughly trained in the harem and each family. Future husbands also judge a woman’s quality by skills and tastes when serving coffee, just as Asian society considers tea making and betel nut. Coffee has become the leading social interaction and exchange, including the need for hospitality, prayer, and home retreat. Even today, the wedding is decided by a formal coffee reception.

For men and women, coffee is the primary social communication and living. The difference is that men meet at public cafes, while women make friends through home entertainment. Since the 20th century, with open conceptions of the equality of men and women and democracy in society, cafes have been a place where friends and families can live freely.

Turki people mainly use Arabica coffee. Turki people use cezve small coffee pots with large bottom and narrow top lid. The material is thoroughly roasted coffee beans and ground to a fine powder-like powder. Usually, kettles are made of copper to conduct heat well and have wooden handles to keep them out of the heat – nowadays also iron or aluminum kettles with a non-stick enamel coating are used. A spoon or spoon is used to measure the amount of coffee and sugar. The average concave is 1 cm long and 0.5 cm wide.

Style of mixing and enjoying

Coffee beans are only roasted before being prepared, then ground into a fine powder. This powder will be put into a dispenser called Cezve/Ibrik. This is a small metal mug with a stable temperature, has a wide bottom and narrow mouth, and has a long insulated handle. A spoon or spoon is used to measure the amount of coffee and sugar. The average concave is 1 cm long and 0.5 cm wide.

This finely ground powder is soaked in cold water, carefully measured, heated but not boiled, and long enough for the fatty acids and specific compounds to be fully preserved. There are 4 degrees of sweetness: 1- Sada (plain, no sugar); 2- az sekerli (low sugar, half a teaspoon per cup); 3- orta sekerli (medium sugar; one scoop per cup); and 4- sok sekerli (lots of sugar, tablespoons and a half per cup). In the Arab world, instant coffee, ie black without sugar, is trendy. The coffee pot can be reheated two or three times and then poured into the cups. The best latte art is thick foam. The kettle should be raised and poured slowly, evenly dividing the cups to maximize foam. To enrich the flavor, coffee can be mixed with nutmeg (cardamom) and cinnamon (cinnamon). However, the coffee poured into the cup must not be stirred with a spoon. After drinking, the coffee powder that remains in the cup is placed face down on the plate and can be used as an omen for fortune-telling. This divination, known as fassomancy, is also applied to tea grounds as one of the social communication methods, although without any scientific or logical basis.

Especially at the EXPO 2020 international exhibition event in Dubai, there will be a performance of Turkish coffee making and introducing to 192 countries the unique and distinctive features of the culture of enjoyment.” sand coffee”. And also, on this occasion, TNI King Coffee will represent the Vietnamese coffee industry to demonstrate the art of mixing and enjoying Vietnamese coffee.